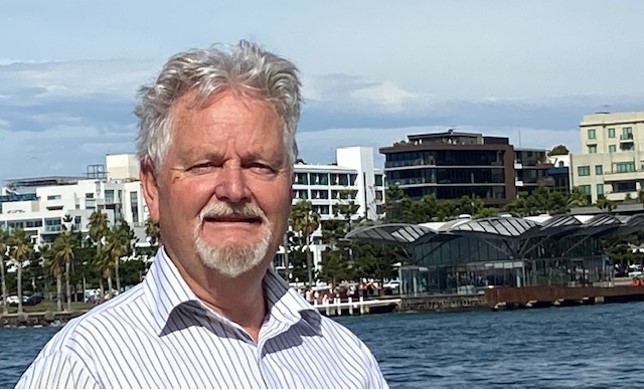 Get to Know David

David is an independent thinker and not indebted to anyone for anything. He is more like the typical Labor constituent the incumbent is supposed to represent, or the aspirational working-class Liberal, a more balanced Green, and everything much of the Corio electorate is. We all know what it is like to take the first step to start off small and build things up. We don’t get anywhere near a local politicians’ salary (i.e., $382k pa) and expenses (i.e., $505k pa), and what do they give us in return?

Why David? He has lived his whole life around Geelong. His family home was in Nagle Drive, back when everything over their back fence was orphanage and farmland. Before even Grovedale or Waurn Ponds existed. He knows first-hand about urban development long term. He bought his first house in Perth St Belmont and later owned a property in Rivington Crt Highton. He went to Primary school in Belmont at the site of the now High Street Aldi.

And rode his push bike to Secondary school at St Joseph’s Newtown & University in Waurn Ponds. And possibly delivered your Addy, Sun or Herald in his teens doing paper rounds.

One of his favorite memories of growing up was when the road was finally tared after 10 years and he nailed his grandfather’s old couch onto a Billy cart, loaded 6 other kids on board swished sparks all the way down the street. PHOTO

He has 17yrs experience in freight & passenger Transport, 17yrs in Health, 25yrs in agriculture/food manufacture/tourism. He worked at the Cancer Council, State Revenue Office, Fords Norlane, BHP North Shore, the Public Transport Corp, and Barwon Health as a Business Manager.

Many of his trade school mates worked at Shell, Pilkington’s, Alcoa, Godfrey Hirst, Brockman Engineering and all the small plumbing, electrical (he even did summer work with John R Salt) and building firms. He was good mates with Chris Pianto in those early working years and never knew the torture he had endured.

David’s father would drive along the banks of the Barwon after the Head of the River regatta with a trailer attached for David and his brothers to collect all the discarded beer, wine and soft drink bottle and recoup the deposits, to teach them the value of work. His mum would take in borders, in addition to the 5 kids, to help make ends meet. “We never thought we were poor, just loved – lots of Catholics lived like that in the 60’s-70’s.”

David has a Commerce Degree with majors in Accounting & Commercial Law and is a CPA, and former medal winning winemaker. He has a Working with Children permit, and Certificates for Food Safety Supervision, Responsible Service of Alcohol, Training & Assessment.

Background: He and Erica have been happily married for over 21 years and have two daughters Ella & Lauren (these teenagers are more passionate and logical about the climate crisis and small business than most adults (See Facebook thesustainablechick) PHOTO with Lauren and the Enviro Surfboard and are his inspiration for pulling this campaign together in only 4 weeks. Oh, and he has a vegie patch, a dog, a cat, and a chicken. You might see his daughters working part-time at Bakers Delight or Paddington’s between their Uni and VCE studies.

Since selling a vineyard business, he has spent the last 18mths completing a hands-on full rebuild renovation of a run-down heritage classified 90yo house to make it a beautiful home again and would have been to Bunnings & Faggs hundreds of times. In fact, before he attended the Ballot draw at noon, he was laying recycled timber flooring across its’ lounge.  PHOTO

But when kids ask “What have you done to:  save the planet”, “help that homeless guy in the CBD street”, stop the houses around Bunnings looking so rundown?” he realized old school Letters to the Murdock owned Editor and calls to lazy Politicians didn’t change anything.

Just like you: David is like most of us in so many ways. He regularly, grocery shops at the major chains & NQR and cooks throughout the week including vegetarian, gets fuel at Geelong owned United, burgers at Maccas and old school grills or vegetarian options, fish n chips on Friday nights, loves dining out everywhere on all food types $-$$$, has a local beer after a day’s labor and a local wine with a meal on weekends, & finds bargains and banter at the Belmont Sunday Market.

David knows this town and region, its people, and the history like the back of his hand.  He takes kids to play sports in Bannockburn/Corio/North Geelong/Thompson/Kardinia Park, donates $ at the Salvos, Lifeline, Good Friday & the kids’ school, goes to a bulk billing GP clinic, recycles in Douro St, loves a retro look at the Mill Mkt, catches public transport, picked grapes at Staughton Vale, helps friends make wines in Norlane, took the kids to work in Anakie, and solo parachuted at Meredith.

He partied at Batesford hall, started the weekend at the Belmont Hotel ‘Copper Bar’, raced go-karts at Beckley Park & bikes at Geelong West, scrambled at Point Henry, rowed on the Barwon and ran on its banks and every other fun run, cycled around the Bay in a Day, held market stalls at Lara, spun out at the amazing Air show, fished on the Bay, played sports on grounds throughout greater Geelong, remembers when Kmart first opened and the whole entrance was cigarettes and guns (and he still shops there before dawn – try it) and he watches the Cats from the cheap seats near the cheer squad when they are in town. PHOTO with Lauren at the MCG last week

Awareness: David knows Victoria well having worked as Relief staff in 27 country towns and Melbourne suburbs, with up to 36 subordinate staff. He has travelled widely in Africa, Europe, Asia, America & the Pacific Islands, and gained a wider appreciation, respect, and positive bias towards diverse cultures, what they faced in their country of origin, what they encounter here, and what they contribute to our multicultural community.  And did I mention he LOVES their food and culture? When his first daughter was born, he organised a Dillon family reunion which showed that from a couple of ‘economic’ migrants escaping the potato famine in Ireland, and from his grandparents alone, there were 150 dinky die Aussies from interracial & interstate marriages working in all sorts of industries right across the nations, contributing to the taxes that paid to support the Government initiatives. PHOTO

He holds car (Kia Rio) and motorcycle (a 1971 vintage Triumph café racer) licences and regularly drives a freight van (and does his own servicing) that is now his mobile election office (Merc Sprinter). He had a gun collection but handed them in after selling a farm at Bannockburn. He doesn’t attempt to play a musical instrument or dance in public, and although he still wears the same sized Levi’s as he did when he was 16, he could benefit from losing a couple of kgs (or at least stop buying shirts 1 size too small!)

Local Equity: David knows that for as long as he has been alive, the electorate of Corio (Greater Geelong) has gotten very little from being a safe Labor seat, unlike the neighboring marginal seat of Corangamite which has been thrown everything. In the first week of this election both major parties have suddenly appeared with over $150M of promises for Corangamite. And did you know that even though 3216 has 25% of the electorates’ population, none of the 40 physical polling stations were in the 3216 locations in the last two federal elections. Was that an incent error or a structural attempt to keep people less likely of voting Labor away on the day. In fact over 10,000 people of the 110,000 electorate did not vote. Marles got in with a primary vote only 7,499 over LNP in 2013, 9,907 over LNP again in 2016, and in the last election he needed the second preference worth 12,902 from the Greens to win (local Greens did not even know the back door deal had been done to preference him – for no return).

By comparison, what has the sitting member provided for the Corio electorate this week? Can you find anything that was not jointly taken credit for with a Corangamite funding announcement? David doesn’t run around only at election time talking at people, he LISTENS every day.

David is appealing to traditional Labor voters to recognise the incumbent is their greatest local issue. The Party has a lot of good intentions but must get its act together here in Geelong after 17 years of Marles in the comfortable chair.

What inspired David to run for Senate?

Watch the video below

Vote 1 for A Better Commonwealth with Dillon

Dream BIG, never take your eyes off the prize, & turn the dream into reality.